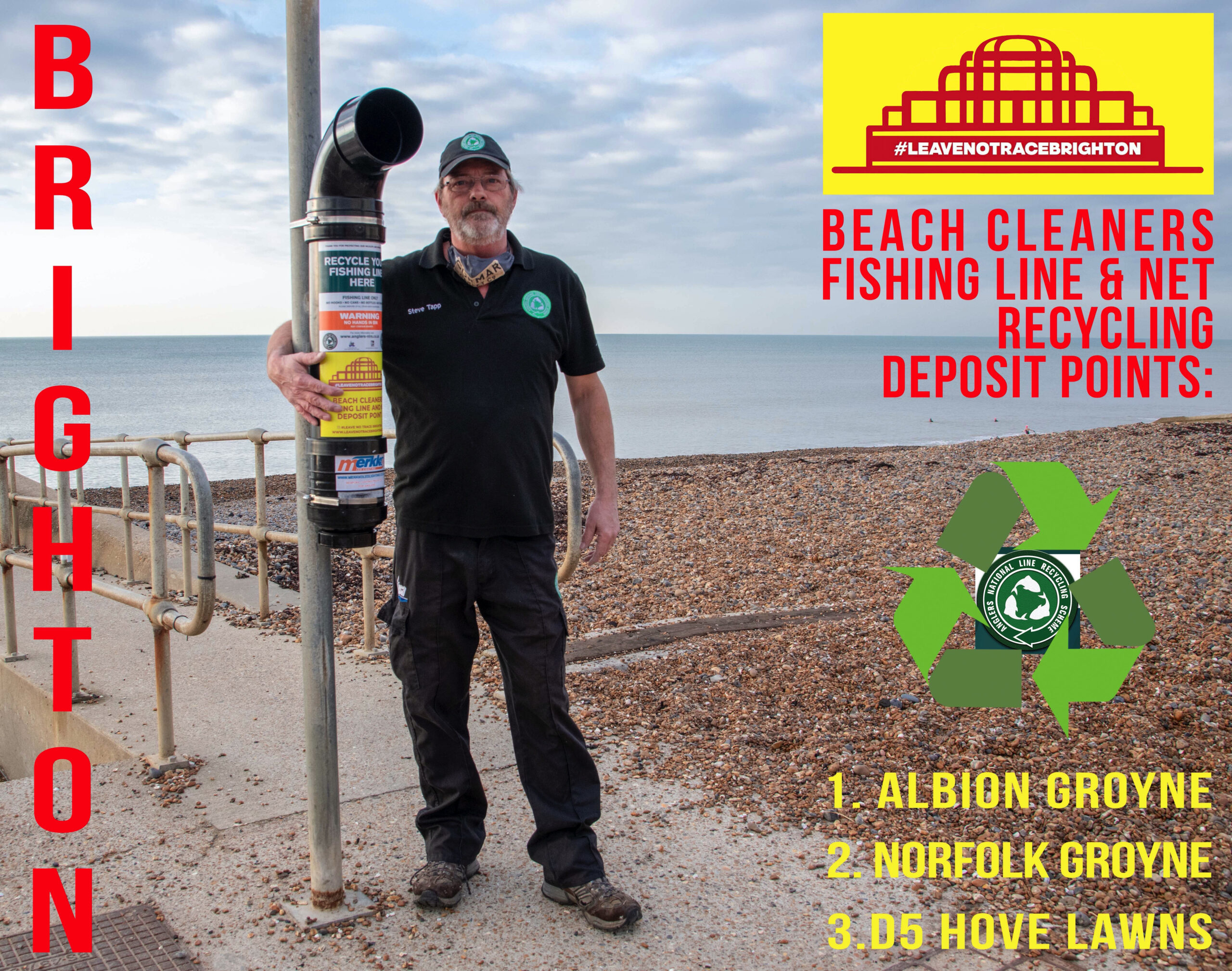 Brighton is the first coastal city and City Council in the country to adopt fishing line and net recycling systems on the seafront in a bid to stop this ‘ghost gear’ being washed back into the sea, where it frequently ensnares and kills everything from fish and crustaceans to seabirds, and even dolphins and whales.

Environment campaign group ‘Leave No Trace Brighton’ has joined forces with The Anglers National Line Recycling Scheme (ANLRS) and Brighton & Hove Council’s City Clean to install three recycling collection points on the seafront for the use of local beach cleaners and anglers, to deposit beach washed-up fishing line and net.

Once collected the net and line is then sent to ReWorked in Leeds, where it is manufactured and recycled for a second life as multi purpose high impact boards. The recycled plastic also has potential to be redesigned into items such as sunglasses, skateboards and even swimwear.

Leave No Trace Brighton is a community initiated campaign promoting responsible rubbish disposal on Brighton Seafront, and over the past 7 months they have been encouraging individual volunteer beach cleaners to collect and clear 3 pieces of rubbish off the beach every time they visit Brighton seafront, via their adopted ‘take3forthesea’ Instagram campaign.  Beach cleaners are asked to send a photo of what they have collect to #leavenotracebrighton for audit purposes.

When organisers reviewed the audit they found that industrial fishing line and net was by far the most frequently reported item of ocean pollution found washed-up on Brighton Seafront.

Leave No Trace Brighton founder Coral Evans said: “discarded fishing line and net is one of the biggest threats to the marine environment.  ‘Ghost gear’ is responsible for the entanglement death of thousands of sea animals every year and not only that, left in the ocean the line and net (predominantly made from nylon, polyester, polypropylene and polyethylene) slowly breaks down or degrades over time, shedding smaller and smaller pieces of plastic that are commonly mistaken for food by small fish and sea animals, including the ones that end up on our plates”

“Although beach clean volunteers were removing this from the beach, we were aware that once binned the line and net which can take up to 600 years to degrade,  would be headed for landfill or incineration, currently the only two options for disposal.  The installation of these line and net recycling deposit points offer an ocean pollution solution, with focus on a circular economy”

“We were aware that the ANLRS  were successfully collecting and recycling anglers fishing line in deposit tubes at popular fishing spots throughout Sussex, so we reached out to see if their scheme could be adapted to collect fishing net in addition to the line and made available to beach cleaners on Brighton seafront.

“Once this was established we contacted Brighton & Hove Council’s City Clean who were fully supportive of the idea, and instrumental with the installation of the recycling collection tubes on Brighton Seafront.”

“I’m delighted that Brighton and Hove City Council are working with Leave No Trace Brighton on this innovative recycling initiative. As a coastal city, tackling ocean pollution must be a priority and integral to our commitment to being a carbon neutral city by 2030, and community projects like this are really making a difference. Huge thanks to all the volunteers making it happen”

The line recycling collection tubes are the brainchild of Brighton based  ‘Anglers National Line Recycling Scheme’.  Founded by volunteer led organisation Local Independent Sea Anglers (LISA) the ANLRS is the first line recycling project in the UK.  Run entirely by anglers the scheme has grown from a few Tackle shops in Sussex in 2016 to national coverage involving over 320 tackle shops and 175 fishery locations.

“We are delighted that  Brighton has become the first City council in the UK to adopt the scheme and are sure that their participation will encourage others around the UK to follow their lead.  Leave No Trace Brighton are a fine example of the many voluntary groups around our shores who share with us a passion to improve our environment. This is a major step towards developing greater national recognition and support for the angler run scheme’ – Steve Tapp, Co-Founder ANLRS