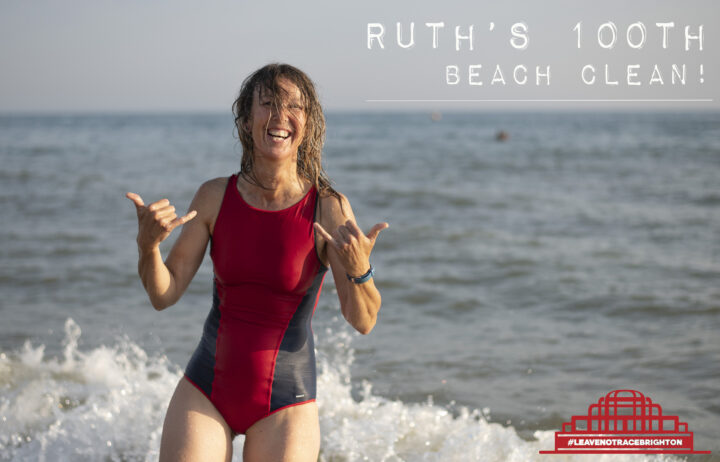 Ruth Rayner is a resident of Brighton & Hove and a true ocean guardian, having just reached her 100th consecutive day of beach cleaning!  #leavenotracebrighton met up with Ruth on King Alfred beach yesterday to say a huge thank-you for taking action and inspiring others, and to hear and share her story.

So Ruth, what happened to make you commit to so many consecutive days of beach cleaning?

During lockdown everything shifted and changed for me.  Being a Salty Seabird I’m constantly around people who care about the ocean, beaches and the planet and I also work for Finisterre, a brand who inspire communities to love and protect the sea, so I’m surrounded by people who want to protect the ocean, but until recently I’ve never taken direct action myself.

Why do you think that was?

I’m saying to myself that it was probably because I didn’t want to pick up any rubbish with my bare hands, and didn’t even consider wearing gloves or using hand sanitiser. Plus I was ‘too busy’, I’d go to the beach for a swim and then run off to teach, or to go to the shop (Finisterre), so maybe there was always an excuse, or maybe that was just the reality of my life at the time.   Then all of a sudden we were in lockdown and I couldn’t go anywhere, everything stopped and suddenly my days stretched out in front of me,  I would go for an early morning swim, then think, ‘well now what?’

I know lots of people experienced the same during lockdown, it was a time when you really had to think about managing and maintaining mental health.  Sea swimming ’normally’  ticked that box for me but during lockdown, with a lot of time on my hands,  I found myself needing something more.   With beaches deserted I became increasingly aware of all the bottle tops, cigarette ends and tiny little bits of rubbish that I never noticed before, and so clearing the beach of these tiny pieces of rubbish seemed like a helpful, logical step.   One day I saw a council van drive past, I stopped them and asked for a litter-picker and some of their blue bags, and that was the start of it!  The plastic bags did bother me though, but I thought I would use those first few donated bags, and then I would look into buying and using compostable ones because if I was going to do a beach clean every day for let’s say one year, that would add up to 365 plastic bags going to landfill,  which wasn’t great and somewhat defeated the purpose of why I was clearing the beaches!    I swam everyday and there was absolutely no reason, with so much time on my hands, that I couldn’t start doing some good for the ocean environment.  …and then it became an obsession, and I couldn’t stop!  As a passionate, all or nothing kind of girl, clearing rubbish off the beach and caring about the ocean became something I took incredibly seriously.

When lockdown ended in June and the whole world seemed to come to Brighton, I saw a huge change on the beach.  I no longer saw the tiny pieces of rubbish, I was now seeing enormous things that were being left such as full picnics, BBQ’s and seemingly full outfits of clothes! It wouldn’t have surprised me to see a small child discarded on the beach because, well why not?! People were leaving quite literally everything else!

Why do you think the beach rubbish problem became so bad after lockdown?

I don’t know, perhaps it was some sort of rebellion because people felt hard done by from having to stay in for so many weeks?  There were just so many beach visitors, it was like an August bank holiday or Pride weekend every day in June and July.   Despite being initially outraged at how our beaches and ocean environment were being so badly disrespected,  I had to try and channel that outrage into something positive. I actually felt quite blessed that I had my health and fitness, and also that I had time – I wasn’t an NHS worker or someone on the frontline, and so I had the time to put to beach cleaning, which actually ended up being very therapeutic.

Whilst on the beach more and more people started talking to me about beach cleaning,  asking me where I got my kit from and how they could get  involved, and it was at this point I realised I was possibly starting to inspire, and being a teacher that’s all you want in life, to try and inspire people to be better.  I’m always trying to be better and I think you’ve got to lead by example, something I hadn’t been doing, environmentally, up until that point.   I felt that the people I was talking to on the beach were at a point where they wanted to get involved, but that maybe they felt some sort of stigma against picking up other peoples rubbish, that maybe it was something a little bit beneath them, but at least my presence on the beach might start to change that mindset.

How does all the rubbish on the beach make you feel?

I’ve gone through the angry stage, now I just don’t have much understanding of why people do it.   I don’t think I’ll ever be able to make sense of it because when anyone visits the beach it’s usually with a whole load of food and drink, which is going to be consumed and so you have less to take home.  It baffles me!  I appreciate that if it’s late and dark you may accidentally leave a few bits of rubbish, but it’s hard not to judge and blame the groups who come to the beach at night to drink and party.  What also fascinates me is that the people I talk to are always outraged by the rubbish, and if it’s not them, or me… who is it? Who are these people that leave their rubbish on the beach?!

How important is the sea to you?

It’s integral, the need to be near the sea is a deep rooted feeling for me. If I can’t get access to some sort of water on a regular basis, either though surfing or swimming, I just don’t feel quite ‘right’.  Today is swim number 284, and it’s my 184th consecutive day swimming this year! I’m aiming for 300 swims by October 1st.   My intention is to raise and give £300 to various local charities, many of them ocean supporting, to mark the occasion and also so that other people can benefit from me being lucky enough to have access to the ocean.

£30! I bought a tow-float from the Salty Seabirds with it, so I did at least put the money back into the local sea loving community.

Soiled pants and wet wipes, which, not having kids or pets was one of the most distressing things I’ve ever had to deal with!

Is every day beach cleaning the new normal for Ruth?

Yes, there’s absolutely no reason why I couldn’t or shouldn’t beach clean every day, or at least (after October 1st) every time I visit the beach.

Imagine the positive, local environmental impact if we all did our bit.