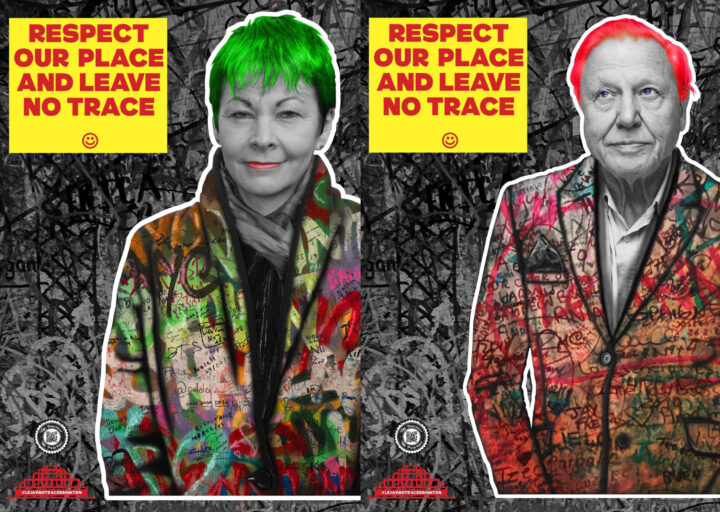 A collective of residents from Brighton & Hove have been working together with local artist The Postman on a campaign to deliver a clear message to be more responsible when disposing of rubbish on beaches.

Headed up by Brighton based visual creative Coral Evans, #leavenotracebrighton has now become successful on Brighton beach front stretching to Hove Lawns, Hove Park and further afield. The campaign has been welcomed by local café’s and take-away outlets shining a light on both the businesses and their customer’s refuse responsibilities. Several businesses on the seafront, who have struggled to cope with the overwhelming litter to the beach especially as lockdown eased, were in support of a strong, hard-hitting and impactful campaign.

Coral Evans says; “At the peak of the problem, with pubs and restaurants closed, Brighton’s seafront became a makeshift West Street but without the facilities. The seafront toilets were stretched to capacity, many blocked which forced people to relieve themselves either on the beach, in the ocean or in adjacent community square gardens. Every morning the beach looked like the

aftermath of a badly managed festival. On June 27th City-Clean removed 11 tonnes of waste rubbish from the beach, the largest amount ever collected”.

What started as an action based campaign to tackle the issue of irresponsible rubbish disposal on Brighton seafront, has now seen popular artist The Postman joining to expand on his current display of ‘rebel icons with a colourful punk twist’ featuring David Attenborough and Green MP Caroline Lucas.

Every aspect of this campaign, from design to implementation has been created voluntarily by members of the community, born from a real worry about the impact both visitor and resident rubbish is having on our immediate environment.

In keeping with the #leavenotrace ethos, the art protest posters are printed on 100% recycled stock using eco-friendly printing inks containing renewable materials such as plant oils in place of mineral oils. The posters will be on display along Brighton Seafront until September 31st after which they will be removed and recycled responsibly.